Born into an Italian family from Verona, Christian Turrini established his furniture workshop covering 6,000 square meters in the heart of rural Brittany, where oak, walnut, cherry, maple, beech and tulip wood from Virginia are all housed under one roof.

Having trained as a cabinetmaker, Christian Turrini learnt the ropes of production at the MATIS manufacturing workshop. After 5 years of fruitful collaboration, he decided to start his own company.

In the course of the first three years, Turrini designed and manufactured his own models of lamps, coffee tables, sofas, end tables and desks. He travelled the length and breadth of Brittany to sell unique and intimate collocations, combining wood with leather and fabric with innovative ideas and an environmental approach that was ahead of its time

Driven by his enthusiasm, in 1992 he met René Trotel who exhibited his designs at the Paris Furniture Show, giving him access to buyers who, impressed by his work, decided to market them throughout France.

1995, 1st encounter with François Roche, founder of ROCHE BOBOIS with his brother, Philippe. The Roches and Christian Turrini immediately decided to work together, recognizing each in the other a shared respect for fine quality materials with respect for integrity.

Caravane was the 1st collection to arise from their association. Designed by renowned French designer Daniel Ezan, this collection was made from cherry wood.

This highly functional and intricately detailed collection that functioned as both CD stand and coffee table in the style of a traveler’s trunk offered a unique edge that helped make it a commercial success. EDEN, the collection following closely in Caravane’s footsteps remained highly successful for almost 18 years.

Having fast grown out of his first 300 square meter workshop in the old municipal workshops of Pont-Scorff, Christian Turrini established a production facility of 2,500 square meters and soon after one of 6000 square meters. The site is entirely devoted to the manufacture of fine quality designer furniture made from a wide range of the finest wood species from all over the world. As such, it offers a unique choice of inspirational materials and some of the most creative designers.

The Christian Turrini team had by this point grown to 52. Production reached the figure of 18,000 pieces a year, an industrial production centered on skilled craftsmanship that is unique in France.

Over the following years Christian Turrini bought one of his main competitors, DAVID LANGE, making La Maison TURRINI the no.1 choice as the benchmark manufacturer of fine quality eco-friendly designer furniture.

La Maison TURRINI, a historic and loyal supplier to ROCHE BOBOIS, enjoys a 30-year reputation as a leading expert in its field. It is able to custom make small series from natural materials with the utmost skill and highest levels of craftsmanship. 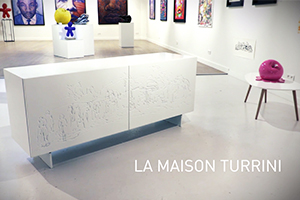